I spent part of my high school years in Wabasha, MN, home of Grumpy Old Men. (Now I am almost one!) Back then, there was no question about school days. You started after Labor Day and finished before Memorial Day (May 30). I played in the band and we were coerced to come back after school was out and play for the Memorial Day ceremony. I wish you could have been there.

In 1968, Congress, in its infinite wisdom, changed the date to the last Monday in May and many pundits say that contributed to the nonchalant observance of Memorial Day today.

That was not true back in the 60s. Memorial Day (Decoration Day, if you were an older American) was very much observed as it still is today in many small towns across the USA. 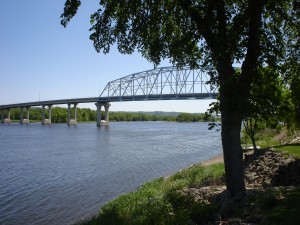 Back in Wabasha, the band was instructed to gather (in uniform) at a city park situated on the Mississippi River. I don’t ever remember a bad weather day. The local Veterans of Foreign Wars would supply the color guard manned by World War II vets. Most of them could still fit in their uniforms.

Just a simple ceremony but one that caused all the participants to remember what others had done for us.

Just after Decoration Day in June 1945, my father sent a letter home. He was “somewhere in Europe,” the exact location was censored. He had gone into Europe at   D-Day plus six or so, and had been gone from home since early 1942. His outfit was being transferred to the Philippines and then on to Japan (after the bomb was dropped.) He wrote the following that June.

“So Ook [his nephew] is in the navy. I’m glad he’s there not in the army. Not that the army is any worse than the navy but from what I’ve seen and what I’ve heard about the hardships down under this is no place for any one that has any brains at all. What it takes here is endurance and a will to go on. I’m not sorry that I’m here. I never could have gained the experience anywhere else that I have here. I’ll admit there have been times when I wondered if any of us will be in our right minds when this is all over.

… I hope that Ook gets along as well as Stan [cousin] did and that he will train for at least a year and never has to go out. I guess perhaps I’m a little selfish where he’s concerned and I’m proud of him, and the rest of you too as I can be. It’s going to be a long time before I get to see any of you again but I never the less I still think of all of you often.”

Happy Memorial Day. We owe it to these veterans, both living and dead, to preserve the freedoms that they so unselfishly defended.