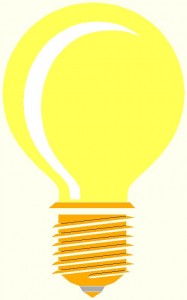 What is the deal with light bulbs? A friend of mine was sent to the store the other day to buy light bulbs. As he perused the aisles, he was confronted with bulbs costing upwards to $89.00 a piece!

Being the typical husband, he immediately knew when he was outclassed and relinquished the light bulb buying tasks to his wife.

What is going on anyway with light bulbs and how do they extend your life?

Congress, in its infinite wisdom, passed a law banning the use of incandescent bulbs, they were following the example of Cuba because the government and the economy work so well there.

The law is very convoluted but the essence of it is to force you and I into using CFLs and LEDs. Don’t feel bad, I had to look up the acronyms—compact fluorescent lamp and light emitting diodes.

Now just to show you I’m a little “green,” I will admit that the LEDs and CFLs use less energy. It’s the upfront costs that will bite. I decided to do the math. (If you don’t like my math, do your own, this was difficult given the convoluted information on the “Net.”)

Now I don’t know about you, but I’m getting to the age where it’s a crap shoot if I’m ever going to see that bulb burned out.

The electric costs on the incandescent bulb are about $7.25 a year. The LED will cost you about a $1.00 a year in electricity. So what’s the verdict.

So break even on the LEDs is just over two years. Now if you consider the time-value of money. No, I’m just kidding, we’re not going there.

It would seem that the decision between using LEDs and CFLs versus incandescent bulbs depends on how you feel about your health and living that 45 years; gives you a new goal anyway.

If you have any deeper real estate questions, please feel free to get in touch with me.

3 thoughts on “New Light Bulbs Cause You to Live Longer”